Preparing for the 'Silver Tsunami' with Succession Planning, Leadership Development, and Millennial Recruitment

Warnings about a forthcoming wave of retirements across large segments of the public sector’s most experienced workers have been bandied around for years. Labelled the “silver tsunami”, the anticipated mass retirement of baby boomers was expected to hit government in 2011 – however, the recession forced many to put their retirement plans on hold. While this gave government agencies a little respite, it only delayed the inevitable, for now it appears those retirements are accelerating across many state and local governments, as the long-awaited silver tsunami finally arrives.

As noted by TranSystems, boomers are reaching the milestone age of 65 at the rate of 11,000 a day. And while it’s true that not all of them are in the workforce, and not all of them are retiring, the vast majority are – or will be very soon. Indeed, according to a US Government Accountability Office (GAO) report, nearly one-third (31%) of career federal employees will be eligible to retire by September 2017. That’s nearly 600,000 members of the government-wide workforce.

Other figures confirm that retirements have indeed been accelerating over recent years. A Center for State and Local Government Excellence survey revealed more than half (54%) of local and state governments reporting an increase in retirements between 2014 and 2015. And this while the percentage of retirement-eligible government employees delaying their retirements continued to decrease (21% in 2015 vs 46% in 2009). As Elizabeth Kellar, the Center’s President, puts it: “The looming talent crisis that we’ve been talking about for years is right on our doorstep.” 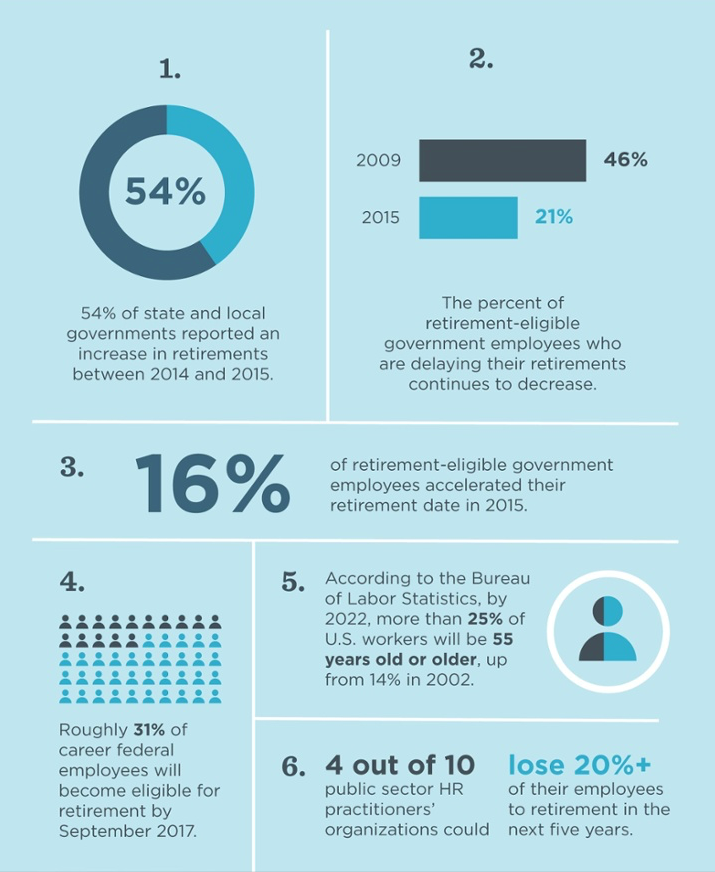 The “Silver Tsunami” Roles On

As the recession delayed retirements, the hope was that government agencies would use the additional time to put succession plans and leadership development initiatives in place, making the most out of being able to retain experienced employees for a few extra years. However, in spite of certain millennial outreach strategies and various other recruitment measures, the majority are still reporting a need for new leaders, as the public sector remains largely unprepared to deal with the wave of baby boomer retirements that is now finally hitting.

In many agencies, significant gaps are emerging that create a drain on institutional knowledge. As the silver tsunami continues, experienced, retirement-aged employees are leaving faster than organizations can recruit, hire, and train new workers. As such, human capital managers are becoming increasingly concerned about their pipelines – how they are going to fill mission-critical positions, and ensure that the next generation of confident government leaders is successfully nurtured. Mike Giuffrida, Acendre CEO, sums up the situation succinctly: “Workforce planning is increasingly important in today’s landscape of competition for talent, career movement, increasing retirements and budgetary concerns for organizations to successfully achieve their goals.”

Clearly, if a massive shortage of skilled public workers with deep institutional knowledge is to be avoided, HR needs to prepare, and, more importantly, identify solutions to act.

Such a scheme was utilized in San Mateo County, California, where a succession planning task force was developed that facilitated confidential discussions between managers and employees about retirement plans, and the best strategies for transferring knowledge. Confidentiality of the meetings was important – while the county wanted its ageing employees to speak openly about their retirement schedules, focus groups revealed that they were often hesitant to reveal their plans too soon. Donna Vaillancourt, the County Director of HR, explains: “They feel if they give too much notice, that they will be considered a lame duck, that they won’t be included in meetings.”

In response, the county developed strict confidentiality guidelines that enabled the opening up of important discussions about knowledge transfer. “It allowed the employee and the manager to work together to identify what skills are important and how they let the next person taking the job know them before the person leaves,” Vaillancourt said.

Leadership skills training initiatives are becoming increasingly critical in ensuring that the right talent is ready and prepared to take on empty boomer positions. Today, many government agencies are finding success with performance management software – such as NEOGOV’s Perform or the Cornerstone OnDemand solution – in order to asses potential leaders’ creativity, persistence, and innovation.

Such software solutions can analyze employee data to identify skill gaps, align individual and team objectives with organizational strategy, and manage employee performance and career goals. With potential leaders with strong visions identified, agencies must then give these people the chance to demonstrate their capabilities. Tom Fox, Partnership for Public Service’s Vice President of Leadership and Innovation, advocates this approach: “As effective as any means,” says Fox, “is giving individuals the opportunity to demonstrate their leadership abilities and monitor and observe their progress first-hand – putting them on task forces, assigning them to special details, anything that allows them a stretch assignment to prove that they have the mettle—is probably the best way of identifying folks.”

It should come as no surprise that, given the current situation, recruiting people with the right skills for the job is most commonly cited as the top priority for government employers in 2017, according to the latest figures from Cornerstone OnDemand in association with WBR Digital, published in the HCMG 2017 Benchmark Study.

This is followed by identifying and retaining top performers, clearly demonstrating the acute need within agencies to preserve the accrued knowledge within their organizations by passing it on to the next generation of senior managers. 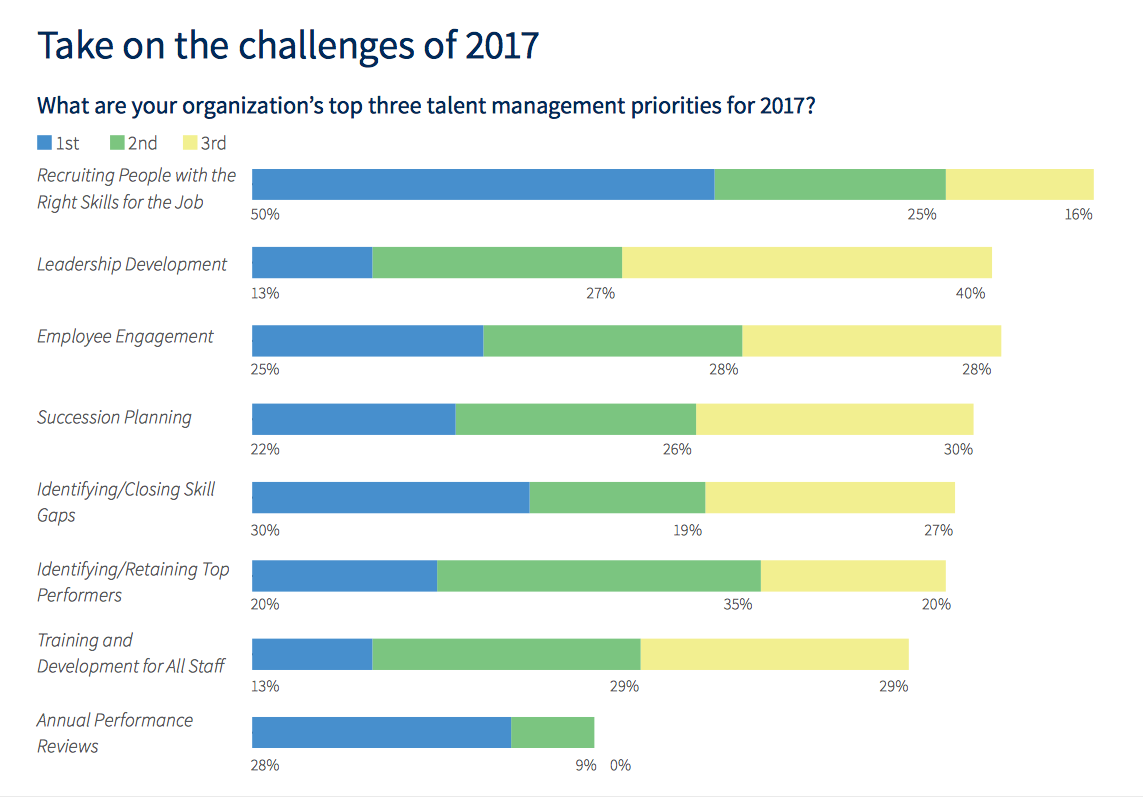 Organizations need to focus on millennial programs and recruiting young workers who can be trained and nurtured to eventually fill positions being left vacant by the wave of retiring baby boomers. The challenge, however, is understanding this generation’s wants and needs, and how to keep them engaged and motivated. Some agencies have found success in utilizing government’s purpose – i.e. to serve the public – to promote job roles to millennials who are looking for a career where they can make a difference. Others are extending social media and digital outreach initiatives to target this generation on the platforms they are already using and familiar with.

Either way, the most important thing for today’s HR agencies is to start developing strategies to deal with the silver tsunami, to begin ramping up efforts in recruiting new workers, succession planning, and leadership development initiatives, and ensure that key knowledge is transferred before a boomer’s last day on the job.

“At the DHS, one of the things that we’ve done is create a tiered leadership program that starts with the employee and then goes clear up through the SES. Our mantra is that anyone can be trained to be a leader, and you don’t have to be in SES or GS15 to be ‘a leader,’ or to have your leadership skills honed within the organization. We’ve taken the approach that our job is to grow everybody from the bottom up and from the top down. We have coaching, we have mentoring, we have webinars where you’re learning on the spot, and other offerings.”

“The other thing that we do is create teams where it doesn’t matter what your grade level is, and anybody can lead them if they have a passion or interest in leading them. It gives them an opportunity to have a more seasoned or experienced person to help coach them through the experience, as well as to step up and lead something. In the past, I don’t think that we would have looked to them to do this because we would have been so focused in on the grade. Now we can put level within the organization aside, and say, ‘What talents or skills can you bring to the table?’ That seems to be working for us.”

Succession planning, and leadership development are set to be hot topics at this year’s HCMG 2017, taking place in Westin Crystal City, Arlington, VA, this December.

Download the HCMG 2017 Agenda for more insights and challenges facing the industry today.

*Processing your payment may take a moment. Please click submit payment only once, and do not refresh this page. Doing so may result in your credit card being charged more than once.

We use cookies and similar technologies to recognize your visits and preferences, as well as to measure the effectiveness of campaigns and analyze traffic.
To learn more about cookies, including how to disable them, view our Cookie Policy